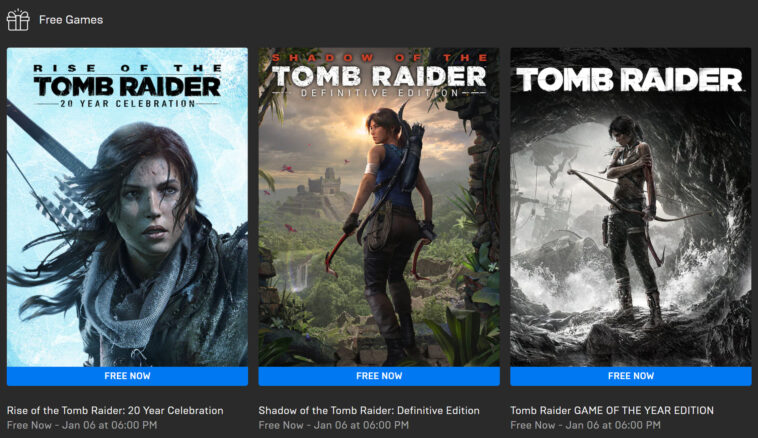 Tomb Raider GOTY (Game of the Year edition)
Tomb Raider is a critically acclaimed action adventure that explores the intense and gritty origin story of Lara Croft and her ascent from a young woman to a hardened survivor. Armed only with raw instincts and the ability to push beyond the limits of human endurance, Lara must fight to unravel the dark history of a forgotten island to escape its relentless hold. The Game of the Year edition includes the Tomb of the Lost Adventurer, 6 single player outfits for Lara and 4 characters.
https://www.epicgames.com/store/en-US/p/tomb-raider

Rise of the Tomb Raider: 20 Year Celebration
Survive extreme conditions with a friend in the new online Co-Op Endurance mode, and brave the new “Extreme Survivor” difficulty. Also features an outfit and weapon inspired by Tomb Raider III, and 5 classic Lara skins. Existing DLC will challenge you to explore a new tomb that houses an ancient terror in Baba Yaga: The Temple of the Witch, and combat waves of infected predators in Cold Darkness Awakened.
https://www.epicgames.com/store/en-US/p/rise-of-the-tomb-raider